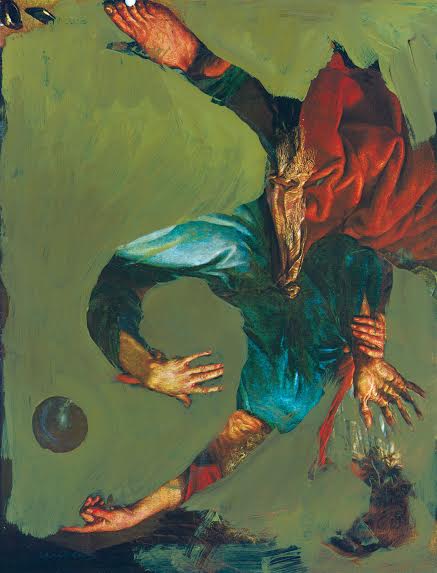 … is now established as an enduring painting group – a long-term project.

In the last nine years, Escalé and Koptak have distilled shared painting techniques, and have come to use their accumulated resources with increasing simplicity and efficiency while adjusting to their very special third voice.

… is based on a shared interest in intervening printed media; this was the common ground, and therefore a natural starting-point for joint experimentation.

The printed material were first related to fashion, then to religion; but it was always about textually or formally modifying any iconic image.

With the passage of time Miroir Noir has gradually dispensed with the original excuse of the accidents appearing on the printed bases, to end up abandoning them entirely. Their practice has become the dark expressionistic painting that has made up the body of their work over the last nearly five years. Acrylic on canvas to build a world of spectres and wraiths, in pure post Baroque dark paint.

Perhaps over-dramatic developments for a group which started off roguish and whose boutade has turned into a Goyesque nightmare.

… which were established during the first two working sessions, and which have hardly been updated so far, set out two unchanging principles: to constantly reinvent themselves and to flee at all times from any relapse in the Style; this would be the first rule of a strict moral code of conduct and analysis in the workshop. And the second one, or…

never consider a picture as finished as long as there are distinguishable painted parts attributable to one of the two members. This second rule has been, during these nine years of intense collaboration, the first consideration to take into account when analyzing any work with honesty.

Miroir Noir has only presented its own work to the public. No work by Koptak or Escalé, or any painting with parts that were only due to one or the other, have ever been exhibited. A real merging and not just the sum of parts as usually happens in superficial collaborations.

In mid-2015, during a casual revision of their individual works, Koptak and Escalé discovered dozens of repainted pages of classical art books in each other’s archives, that each of them was still producing alone, and from which they were extracting new scenes, or mythological figures and beasts.

This discovery caused a certain shock within the group, and since a long collaboration is only possible based on mutual admiration, when seeing these recent collections, both remembered the original reason of Miroir Noir’s existence.

The quality and quantity of the material made it clear that for the first time Miroir Noir could break the Golden Rule and consider an exhibition showing Koptak and Escalé’s separate graphic universes, at the same time showing how each faced his

which is the Aragonese neostyle of artistic adjustment or correction, applied with clumsy hands and mild minds over works of the Old Masters. An essential part of Cecilism is to amend the damages, while concealing updating efforts, and usually ending up in a simple correction. In this process, icons that can be extracted from the repainted work are based on a larger icon – which is the known historical image in itself. (see: https://www.youtube.com/watch?v=pj-eTk1ZlD8)

Work on paper, fresh and provocative – for the first time a de-constructed Miroir Noir: Escalé and Koptak side by side riding in freedom! 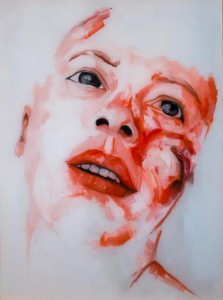 The artist Gori Mora presents his new project for KONVENT; TRANSIT, the body as spectacle. The works revolve around sexual desire, understood as one of the primary movers of social communication, accented with the phase of sexualrelease.

Perhaps the body is the only thing that we have, a pure appearance of ourselves, an object of desire made flesh in permanent change and transformation, resulting in a continuous creation of various roles.

What interests me is erasing traces of individuality that we all have, approaching a dehumanization of the face, and so, erasing gender differences. The body is also pushed to its limits, a way of putting oneself to the test and discovering oneself.

The disappearance of the body is present in our daily lives, surrounded by this reality that we live, where we feel that the body is transformed, we are in flux, a body in transformation, thus, we are time.

The skin is shown as matter, a throbbing skin which produces a sensation of urgency. The contours of the figures are stretching out like landscapes on sheets of plexiglass, a body exploring itself, creating transformations through a game of perspectives. But there is something disturbing and terrible in this beautiful dehumanization. The body is in an unbounded place, a quiet place where it loses itself and disappears. 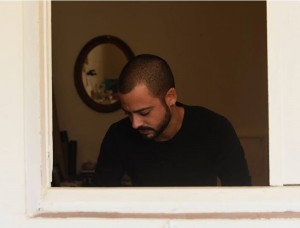 Gori Mora is a multidisciplinary artist and restless soul? He has had several exhibitions, including the KAPROW project for Fundació Tàpies in Barcelona (2014), The becoming of the body for the exhibition room, La Caixa Porreres, Mallorca (2015), SENSE TÍTOL Exhibition Hall of the Faculty of Fine Arts at the University of Barcelona (2015), among others.

Currently he belongs to the Hell Collective where he had the exhibition Purgatory ‬in Mutuo centre d’Art, Barcelona (2015). Following this exhibition, his brush strokes evolved into pure fleshless skin, skin as pure matter. The artist says that from there the new project TRANSIT arose. 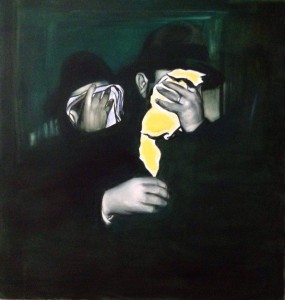 Dieter De Greef (1969) is a Belgian artist who works and lives in Brussels. His paintings take you on an unexpected journey where things are not always what they seem. What initially appears comic is simultaneously tragic, the mundane routine of everyday life is sometimes reassuring, sometimes apocalyptic, lovers dare not look each other in the eye as we watch and feel them share an intimate connection and human fallibility and the often grotesqueness of human desire is depicted with the same sense of compassion as one would have for the innocence of a child’s longing for attention.

This is De Greef’s signature whether he chooses a comic strip motif or bold blocks of colour to portray his subjects. He lays bare a complete spectrum of emotions with a courageous, often humorous but most notably non-judgmental sense of acceptance making his subjects all the more compelling.

De Greef graduated from St Lucas Art College, Brussels in 1991. It was a starting point (“enfin – everyone needs a starting point”) from which he was able to explore techniques, boundaries and his own sense of craftsmanship but as he says himself, “there is no better teacher than the daily grind.” He paints in his studio every day, rarely taking a day off. 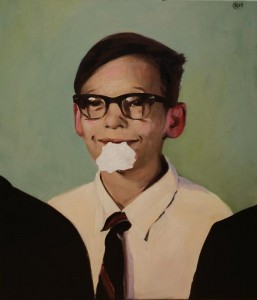 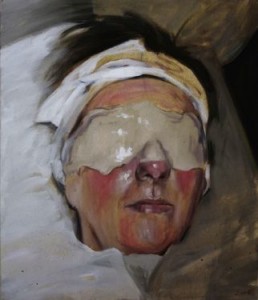