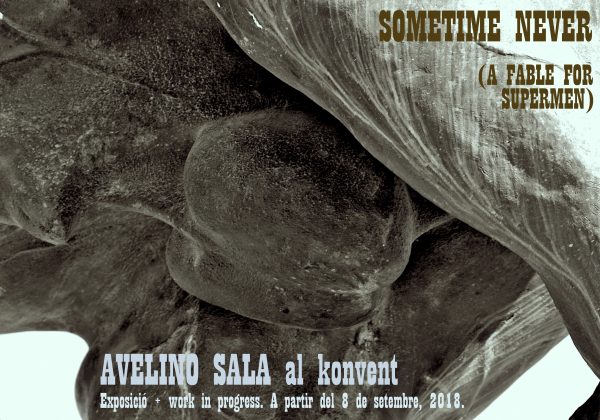 Sometime Never (A Fable for Supermen) In the work of Avelino Sala (1972), nothing is what it seems to be. This is confirmed by the proposal presented by Konvent. Sala, although an excellent sketcher, is committed to this space for a set of pieces where the appropriationist approach of objects predominates, transmuted in conceptual masks through which another world is understood, undoubtedly an unhappy world. For Avelino Sala, the exhibition space is not a place to display seduction points in order to attract the spectator, but rather an urban guerrilla field where to place barricades, walls, riots, revolutionary stories of another time that is no longer.

If Picasso said that the great artists stole – he did it himself with the verse of T.S. Eliot “immature poets imitate; mature posts steal “-, in the case of Avelino Sala the most approximate procedure to define their artistic behavior would be the hacking of reality. Sometime Never hides the title of the homonymous novel by Roald Dahl to display one of his essays on traditional worlds, utopias. Thus, the games of appearances multiply indefinitely until they are located on the verge of reflectivity or at the gates of the abyss. And what is out of time (uchrony) is available along with what is in place (utopia) to configure a mask that expresses its own tautology, such as Lista Forbes (2018), Larvatus prodeo (2016) or Por cojones (2018), what is shown is simply the phenomenal surface of things, forcing the spectator to position his perception from a political perspective.

Despite what may seem at first, there is not much post-modern sensibility to Sala’s work; On the contrary, there is a vigorous persistence of narrative and literality in their work. Indeed, the stories turn out to be an essential component to understand in depth the discursive practice of Sala, because a negligible part of its pieces and facilities share the common denominator of functioning as much as micro-narratives; fragments of past history – Symbolic (archaeological) Museum of the Revuelta or Barricada (2018) – or the future, such as The (New) Religion (2018). But stories of a futuristic time also exist if the necessary conditions were given for a new, apocalyptic period, such as this “super-men’s fable” that emerges from the subtitle of the exhibition.