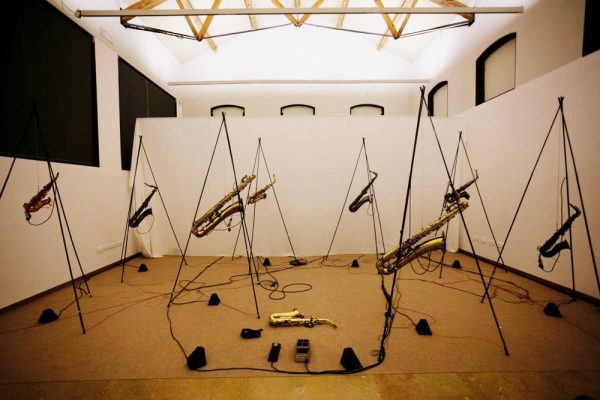 Aresta is a new audiovisual installation working on automation, algorithmic composition and audio-visuality.

Aresta takes the form of a sculptural audio installation, working with the concept of automation. We are experiencing a fundamental shift in the relationship between workers and machines, with a 2013 study by Carl Benedikt Frey and Michael A. Osborne at the University of Oxford concluding that occupations amounting to nearly half of US total employment may be vulnerable to automation within roughly the next two decades.1   This shift will ultimately challenge one of our most basic assumptions about technology: that machines are tools that increase the productivity of workers. Instead, machines themselves are turning into workers, and the line between the roles and capabilities of labor and capital is blurring as never before.

In Aresta I propose to have an ensemble of saxophones turning into players, removing the human element from the musical performance, and making the instruments autonomous. Eight saxophones are hanging on stage from custom designed metal structures. Speakers are placed inside their bodies with sound resonating through the tube, creating a particular timbre for each of them. More than a hundred LEDs are placed inside the instruments working in perfect sync with the sound and creating a choreographed, visual effect during the performance.

The music is generated by computer, using algorithmic composition and neuronal networks to create textures, rhythms, harmonies and melodies. A custom made neuronal network was created in collaboration with Gaëtan Hadjeres from the SONY studios in Paris, which is capable to compose chorales in the style of Bach (Bach took melodies from Lutheran hymns and harmonized them in four voices). With this software trained with 352 Bach chorales, the saxophone ensemble is able to harmonize a melody given by the performer in real time.

Aresta takes the form of a constant dialogue between the performer and the machine, questioning the need of a human body on a stage and the predictability of its role. Is artificial intelligence an economic and political construction that will disenfranchise most people? Will creative jobs also be replaced by technology? If we don’t even need to be creative, what will we humans do?.

Saxophonist and sound artist working at the intersection of art and technology. His artistic production has always been led by a spirit of innovation fueled by an interest in new media. His work is an exploration of the interaction between human beings and machines, often with a focus on the relationship between sound and visual elements.

Vilanova is currently creating audiovisual performances/installations while also working with electroacoustic compositions, improvisation, and interdisciplinary collaborations with dance, theatre and moving images. His performances have been presented in festivals around the world in Japan, the U.S., Canada, Brazil, Colombia, Iran, Taiwan, Russia and many countries in Europe. Hi won several international prizes and lead workshops and master class in many prestigious universities of America, Asia and Europe.